You are here: Home » About Steenson Funeral Services

R. Steenson & Son was founded in 1905 by the late Robert Steenson who had been a manager in the undertaking company Silas E. Weir & Co. in Cookstown for some twenty five years. The first motor hearse was purchased after the first World War, a Crossley Motor Tender, as used by the Royal Irish Constabulary. Robert Steenson (left) is shown conducting a funeral in Church Street, Cookstown, ca. 1930 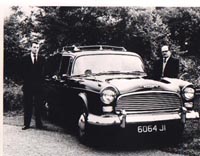 Robin was the first of the family to become a Member of the British Institute of Embalmers (B.I.E.) in 1981 and gained his Diploma in Funeral Directing in 1982. He was a chairman of the B.I.E. and was also an Northern Ireland (N.I.) area National Council Representative on the B.I.E. as well as N.I. Area President  of the National Association of Funeral Directors (NAFD).

The firm moved to spacious new premises in Loy Street, Cookstown in 1990. The extensive premises include a funeral home/chapel of rest, viewing rooms, coffin selection room, embalming room, car park and cloakrooms. Visitors can also view a wide range of memorials and wreaths. The private car park provides parking for over thirty vehicles and there is public car parking for over two hundred cars close by. The interior decor was designed by Robin's wife Gillian who is also a partner in the business.

Steenson Funeral Services  has considerable experience of repatriating deceased persons to Northern Ireland and also from Northern Ireland to overseas. We can advise on legal requirements and procedures and can help with all the arrangements

Want to add your words of support to a bereaved family? Use this link to add your condolence to an obituary article or view condolences left by others.

Kerbs and posts sometimes become loose on memorials. We can repair the memorial and prevent this reoccurring.  Over the years most memorials will require cleaning. We offer a cleaning service that can restore memorials to almost new condition.